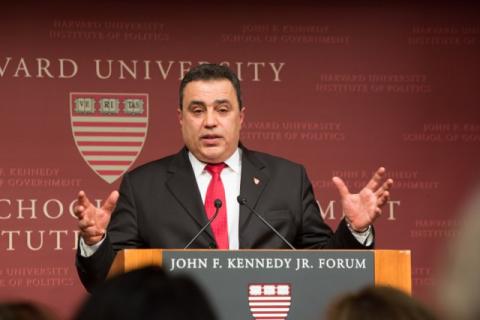 Mehdi Jomaa served as Prime Minister of Tunisia from January 2014 to February 2015. He was chosen to lead an independent, technocratic government and guide Tunisia towards it first general elections under the new Constitution. His appointment was the result of a political compromise after several months of an acute political crisis. Prior to his appointment as head of government, Jomaa served as Minister of Industry in the cabinet of Prime Minister Ali Laarayedh from March 2013.

Thank you for meeting with us Prime Minister Jomaa. Tunisia of course has been widely praised as a successful example of an Arab democracy. But what do you think is single greatest challenge facing Tunisia’s nascent democracy now that is has completed its democratic transition?

I think first is our economic challenge. As we succeeded in our political transition, we must also succeed in making an economic transition as well. We have to make many reforms and you know its not simple to make economic reforms. And its less simple when you know that we are again in a period of transition, but we have to find enough courage to do it. It is mandatory for us to do this because the revolution that happened in Tunisia was for freedom as well as for more jobs, more opportunities, and more balanced [regional] development. We have a big difference [a development gap] between the inland and coastal areas of the country and we must address that. We can’t address these social and development imbalances and other issues without making fundamental economic reforms.

I think we are not a model for anyone actually. Maybe we are an example, but we don’t like to say model because we have our specificities and certain things cannot be replicated anywhere. But its an experience in creating hope and that could inspire other countries. And really its good for ­­­­the young people. Similarly, we don’t have a single model to follow, every country has its own specificities. But we share many of the fundamental values that are included in our constitution, like freedom of expression, freedom of belief, and many other universal values that do not come from one specific country but are common values.

During your year in office, what do you think was the most important decision you made, given the political crisis that was the backdrop of how you came to office?

The first thing was how we managed the political crisis and security situation, in order to bring about stability and allow for free and fair elections in a safe envrionment. We also prioritized the fight against terrorism. We put a lot of energy into this and achieved a great success. Tunisia is now safer and we have more protected boundaries from all the threats coming from outside or inside.

Was there a particularly important decision for enforcing the security?

Yes, there were many that we made. We laid out the concept of a “crisis cell,” and I consulted on these decisions around the table with leaders in the different ministries, interior, police departments, etc. It’s an organization that helped us make decisions quickly but also well-based on the right inputs and information. We call this our “crisis cell” but it’s really a crisis management committee. It allowed us to really face the decisions we needed to make in a quick manner and efficient way, and we see now some other countries are also doing this which is really good.

So Tunisia as a model for other countries (laughs). Tunisia is a major source of foreign fighters for the Islamic State, ISIS. Do you think the move to democracy has contributed to this problem, and what do you think is necessary to solve it?

I don’t think the move to democracy produced combatants. No, first we must say no more, because this happened just after the revolution when the state was weak. As you know, the aim of the revolution was to shake the [foundation of] the state, throughout the regime. The police at that time was seen as the tool of the repression of the regime. And so they [combatants] took advantage of that, and some of [these fighters] immigrated to other countries in the Middle East. Since that time things have changed a lot. We now control our land, we control our country, and we control our boundaries and we cut the flow. So it wasn’t democracy but the lack of the state [that contributed to the emergence of foreign fighters], that was the challenge caused by the revolution. I think things are better now, but the problem now is how to deal with the people coming back from Syria and Iraq. But its not a question that we have to face on our own – many other countries, even in Europe now and throughout the world, are facing this question and we are working in collaboration with these other countries to address this issue.

The next question is with regards to your personal plans now that you have just left office. You came to office as an apolitical, technocratic government, but over the last year you have become a very popular public figure. Even though you don’t have a history in traditional politics and political parties, do you think this is something you might do in the future?

In the near future, I think I will first recover and resume having a civil, normal life. In the future it depends on if the country has any need for me and my team. If so, we will serve in any position, either political or not, as we have the qualifications to help support this country and continue to contribute. Anyhow I will not set up a political party today, and we will see for the future, I can’t forecast really.

Politics in the United States especially is very polarized, and compromise is very hard. But you came to power as Prime Minister as the result of a remarkable compromise. Why do you think compromise has been successful in Tunisia, and what will help make it successful in the future?

I think it’s the history of Tunisia. It’s a country with 3,000 years of history based on tolerance and compromise, really. And when you see the history of Tunisia you see that every time we had a big crisis, the exit was compromise. So its inherent and inherited from our history and tradition. That’s the first point which is important. Second, we have a good civil society, which exerted a lot of pressure on political parties to push them to find an agreement and compromise. It was very important and we have a very active civil society, and women in the civil society are more active than men. If you know Tunisia, you know how present women are, and that’s one of the key factors of Tunisia’s success. 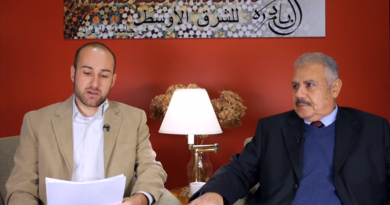 Inside the Middle East: Kuwait (Video) 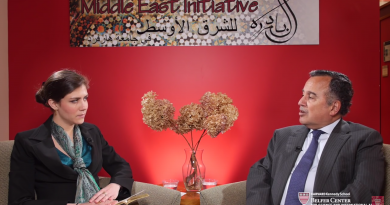 Inside the Middle East: Egypt with Nabil Fahmy (Video)