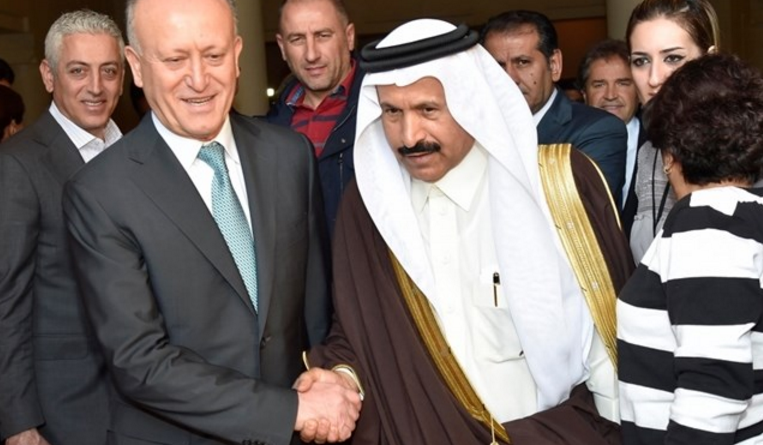 Headline of the Week

Kuwait and Qatar have urged their citizens to leave Lebanon and avoid travelling to the country, following a similar move by Saudi Arabia, Bahrain and the United Arab Emirates. The member-states of the tight-knit Gulf Cooperation Council have  yet to provide details on the specific threat behind the decision, which comes a week after Saudi Arabia withdrew $4 billion in arms funding for the Lebanese army. The pro-Saudi Lebanese Justice Minister Ashraf Rifi resigned Sunday in reaction to the news.

The Saudi move is a protest at the influence Iran holds over the Lebanese government. The Lebanese government last month refused to sign a Saudi-led condemnation of the January ransacking of the Saudi embassy in Tehran. Iran-backed Hezbollah holds a powerful position within the Lebanese government and the Islamist group has sent thousands of fighters into Syria to prop up Bashar al-Assad, a key ally of Tehran. The power struggle between the Saudi and Iran-backed political coalitions within the parliament is blamed for the political deadlock in Lebanon. The country has been without a President for 21 months and governing paralysis led to widespread protests over the so-called ‘Garbage crisis’ last summer.

Hezbollah supporters blocked roads across Lebanon in protest of a Sayed Hassan Nasrallah skit aired by Saudi-owned channel. The two-and-a-half minute satire presented a man impersonating Hezbollah’s party leader. Roads have now been reopened and no violent outbursts were reported.

Palestinian journalist Muhammad al-Qiq ended a hunger strike in response to deal that called for his release in May 21st. Mr. al-Qiq began his strike over three months ago in protest of his arrest under administrative detention by Israeli authorities. Israel’s Supreme Court argued al-Qiq was “clearly a Hamas activist involved in militant terrorism.” The imprisonment has instigated widespread protests from human rights groups demanding his release.

Just hours before a temporary cessation of hostilities was set to take effect, Russia reportedly increased the intensity of its airstrikes in Syria. According to the Syrian Observatory for Human Rights, Russian warplanes targeted areas east of Damascus, northern Homs Province, and western Aleppo. Russian President Vladimir Putin has claimed that his forces were targeting Islamic State and Nusra Front fighters. As the ceasefire agreement does not include either group, the impact of Russia’s actions on the agreement’s fulfillment is hard to gauge, though all parties involved have expressed concern over its successful implementation. Since the ceasefire went into effect, both Russia and anti-government rebels have made allegations of breaches of the truce, though no official action has yet been taken.

Kuwait celebrated its 55th national anniversary and the 25th anniversary of its liberation from Iraqi forces this Thursday and Friday.

The European Parliament has adopted a resolution to implement an arms embargo against Saudi Arabia. The move aims to force the investigation of allegations of breaches of international humanitarian law by the Saudi Air Force in Yemen. The Saudi ambassador to Brussels, meanwhile, has blamed his country’s interventions in Yemen on Iran, in an effort to prevent the embargo. In an apparently unrelated move, the UAE has pulled its ground troops out of the port city of Aden, though the Emirates reportedly maintain forces elsewhere in the country.

Thirty-two people put in trial in Saudi Arabia for allegedly spying for Iran. The defendants face charges including passing “sensitive military information, seeking to sabotage Saudi economic interests, undermining community cohesion and inciting sectarian strife.” Most of the defendants are from Saudi’s Shia minority. The group includes a professor, a banker, a pediatrician and two clerics who claim not to be involved in politics.

Polls closed this week in Iran’s first elections since the lifting of sanctions in response to the recent nuclear agreement. Iranian President Hassan Rouhani appears to have won a vote of confidence against hardliners more closely aligned with the country’s supreme leader, Ayatollah Ali Khamenei. Meanwhile,  reformists made surprising gains in parliamentary elections and have prompted high hopes for the country’s emergence from years of isolation.

Islamic State fighters have claimed responsibility for a bombing that killed at least 70 people near Baghdad, in addition to several attacks targeting Iraqi security forces across the country. Amidst growing violence in the country, the leader of a Sunni militia group has begun lobbying in Washington for a shift of military aid away from government forces towards regional and tribal units.

The so-called Islamic State faction in Algeria, Wilayat al Jaza’ir, claimed to have killed several Algerian soldiers this week in a skirmish that took place in the northern province of Bouira. While not confirmed by the Algerian military, it is the first attack to have taken place since the 2014 beheading of Frenchman Herve Gourdel.

The annual Sahara Marathon kicked off its 16th iteration in the al-Ayun Sahrawi refugee camp on February 23rd, spanning tracks in and around Tindouf, Algeria and featuring participants from over 20 countries.

For the first time, Egypt has been invited to the G20 Summit being held this year in Shanghai.

Egyptian president Abdelfattah El-Sisi stated in a televised address this week that the downing of a Russian plane in late October of last year after departing from the Egyptian tourist resort of Sharm El Sheikh was, in fact, an act of terrorism. This comes after months of alternative theories issued by the Egyptian authorities pertaining to the causes of the crash, including accusations of an international conspiracy to undermine Egypt.

The German and Italian governments are being called upon by EU politicians to explain the apparent sale of surveillance equipment to Egypt that would permit the “mass surveillance” of Egyptian citizens.

An European Court ruling which invalidated a Moroccan-EU trade agreement prompted Morocco this week to fully suspend its relationship with various EU institutions as a result. The court ruling is said to be linked to Morocco’s jurisdiction over – and agricultural exploitation of – the territory of the Western Sahara. The majority of Moroccan trade is conducted with countries within the EU.

Tunisia has extended its state of emergency until March 22nd, 2016. The current state of emergency was implemented in November 2015 after a trio of attacks that took place throughout the year, including the final attack on a presidential guard bus claimed by the so-called Islamic State. The country’s tourism industry continues to suffer as a result of perceived insecurity.

Killings and torture are being committed with impunity by all sides in Libya, according to a UN report. Victims include detainees, journalists and human rights activists. Scores of people have been tortured and killed.

The French publication Le Monde reported this week that French special forces are conducting secret military campaigns in Libya in collaboration with American and British forces. The French have largely denied intervening against the so-called Islamic State in Libya. The internationally recognized Libyan government, for its part, denied the report, while the unrecognized government in Tripoli confirmed it.

Serbian and American officials are continuing to wrangle over facts pertaining to the deaths of two Serbian diplomats in Libya, which Serbian officials claim were the direct result of a US air strike against ISIS targets. The US, on the other hand, claims that their deaths were the result of the actions of a “criminal group” that used the US air strikes as a cover up.

Sudanese President Omar al-Bashir this week praised his country’s armed forces for their performance in Yemen while participating in the Saudi-led “Decisive Storm” operation against Houthi forces. Bashir also praised the army’s efforts to combat the Sudan Liberation Movement in fighting that forced over 70,000 inhabitants of the Jebal Marra region to flee their homes.

Mauritania has confirmed its readiness to host the 27th Arab Summit, according to Nabil El-Araby, Secretary General of the Arab League. Meanwhile, the U.S. State Department has updated its travel warning, citing recent kidnappings and attacks carried out by al Qaeda and al Mourabitoun terrorist groups.

Unidentified gunmen killed three Malian soldiers this week at a government checkpoint near the Mauritanian border. Though the incident has yet to be attributed to a specific group, al Qaeda in the Islamic Maghreb (AQIM) has conducted attacks on United Nations personnel and others in the past year.