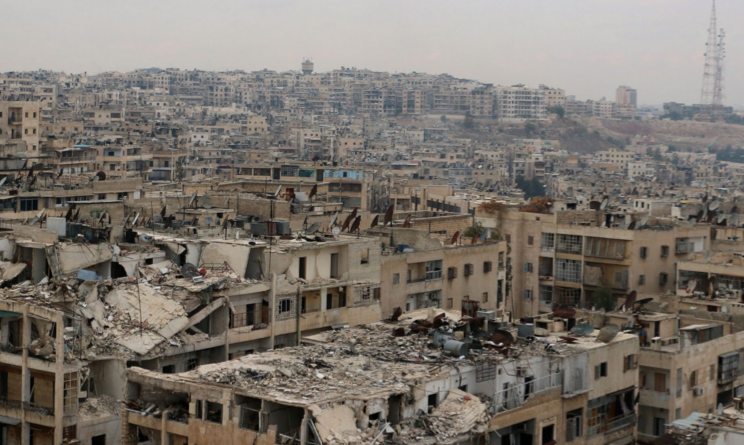 This past week saw the UN Education, Science, and Cultural Organization (UNESCO) pass a resolution weakening Jewish claims to the Temple Mount area, also known to Muslims as Haram al-Sharif,  in overwhelming favor, 33 to 6. The UNESCO resolution, authorized by the executive board’s Programme and External Relations Commission, was submitted by Algeria, Egypt, Lebanon, Morocco, Oman, Qatar and Sudan.  This resolution accuses Israel of “planting fake Jewish graves in Muslim cemeteries,” and of the “continued conversion of many Islamic and Byzantine remains in the so-called Jewish ritual baths or into Jewish prayer places.” Furthermore, the resolution places quotations around terms “Western Wall” and “Temple Mount,” seemingly contesting Jewish claims to the holy sites of Jerusalem.  This resolution has drawn the ire of the Israeli government, as many Israeli politicians, including Yair Lapid, have accused UNESCO of waging a political campaign against the Jewish state.

Jordan’s parliament has granted further constitutional powers to King Abdullah, including the right to appoint members of the senate and the head of a top court. These new powers come with no strings attached for Abdullah to appoint and fire whomever he deems appropriate. Critics claim the amendments push Jordan closer to an absolute monarchy, rather than a constitutional monarchy, and indicate that the king may be reneging on the promise of reforms during the 2011 regional uprisings, which would have put limitations on his rule. While more media focus has recently fallen on Jordan’s banning of a Lebanese rock group from performing inside the country, this ruling will likely garner negative attention from critics both inside Jordan and abroad.

U.S. Secretary of State John Kerry will be in Geneva this week on a hastily arranged trip to salvage the tenuous ceasefire currently in place throughout most of Syria. The agreement, which was brokered on February 27 by Moscow and Washington, applied to Western Syria but excluded military actions against al Qaeda or ISIS fighters. However, fierce fighting has since erupted in Aleppo, threatening the already limited arrangement. Kerry is due to meet with the UN envoy to Syria, Staffan de Mistura, as well as the Saudi and Jordanian foreign ministers. Secretary Kerry has said that he will push for a reaffirmation of the cessation of hostilities across the country, including Aleppo, where humanitarian concerns are growing amidst intense bombardment.

As the Syrian civil war continues unabated on Turkey’s southern flank, and as a counterinsurgency operation in the country’s Southeast against the Kurdish PKK terror group intensifies, Turkey’s tourism sector has taken a large hit.  The first quarter of 2016 saw the country’s revenue drop 16.5%, compared to 2015, attributed to a drop in Russian tourism as well as to rising security concerns on the heels of several deadly terror attacks.  As of March, the number of foreigners arriving in Turkey had dropped 13%, compared to 2015.  While the Turkish government has discussed a number of economic packages to make up for the loss in tourism, it remains to be seen how Turkey will attract tourists as ISIS and PKK terrorists continue to target the country’s largest cities and tourist sites.

Kuwait is reportedly considering an amendment to its labor laws that would deport expatriates who lose their jobs in the country. If true, these rumors will signal the latest move in Kuwait’s attempts to rebalance its workforce away from foreigners and towards Kuwaitis. However, efforts to promote Kuwaiti participation in the private sector have stalled, suggesting that simply deporting unemployed foreign workers may do little to reach the government’s goals.

Qatar National Bank has acknowledged that at least some of the private information revealed through a recent data breach is accurate. The leaked data includes passwords, credit card numbers, national identification numbers, phone numbers, and email addresses. So far the bank, Qatar’s largest, has released no specific information on how the breach occurred, stating only that it found “abnormal activity” in its systems.

A fourth round of peace talks began between the internationally recognized government of Yemen and the Houthi rebels. The United Nations-brokered talks, which are being held in Kuwait, discussed ways to bolster the ceasefire that went into effect on April 10. Ismail Ould Cheikh Ahmed, the UN’s Yemen envoy, said the peace talks have been “constructive.” However, some reports claim that the negotiations have made “no progress” due to the major disagreements between the two sides.

Disgruntled employees of Saudi Binladin Group, a construction firm, have set fire to buses in protest over frozen pay and layoffs. Thousands of the firm’s employees have been protesting for weeks over back pay issues, but this latest round of destruction came after reports leaked that the firm planned to terminate 50,000 foreign workers and issue them exit visas. Low oil prices have forced construction firms throughout the Gulf to shed employees and governments delay or cancel infrastructure projects.

Supporters of President Hassan Rouhani have made gains in parliamentary runoff elections, the first to be held since the nuclear deal last year. However, President Rouhani’s supporters fell short of winning an outright majority in the parliament, gaining 122 out of 290 seats. 68 contested seats were up for grabs in the runoffs, the results of which still must be approved by the country’s Guardian Council, a vetting body. Rouhani’s moderates and reformers will form a formidable bloc in the parliament, but without a majority are unlikely to implement significant social or political reforms. At the same time, conflicts with conservative hardliners, who are slowly losing their grip on Iranian politics, are likely to intensify.

On Saturday, protesters aligned with Shia cleric Muqtada al-Sadr penetrated the fortified Green Zone in Baghdad, storming the parliament building and breaking into its offices. The demonstrators were protesting against delays in appointing a new cabinet. Iraqi Prime Minister Haider al-Abadi has attempted to replace government ministers accused of corruption with non-aligned technocrats, but the plan has faced stiff opposition in parliament.

Like many other oil-dependent economies, Algeria is now facing decreasing revenues and spending cuts due to continuous low-prices of oil and gas.  Forced to think long-term about a restructuring of its energy-based economy, the government has issued new legislation offering foreign businesses incentives for investing in Algerian projects that are not oil/gas related.  “The bill provides for new mechanisms to ensure support to investors, the improvement of the business climate, local decision making and the creation of a new one-stop shop,” said Industry Minister Abdesslem Bouchouareb.  The Algerian government hopes that this move can alleviate the weight of oil and gas subsidies in order to pave the way for greater investor confidence from international companies.

Algeria’s President Abdelaziz Bouteflika returned to Algeria this week after a visit to Geneva, Switzerland, for another “medical checkup”. There has been increased speculation about his health and, therefore, his capacity to lead the country, after having kept a relatively low profile in recent years.

The Egyptian government has put on trial 237 individuals arrested for protesting against President Abdel Fattah al-Sisi, according to sources within the country’s judicial system. These cases will be the first to go to trial on the heels of April 15th’s anti-government protests. Altogether, 382 people were arrested by security forces, according to Human Rights Watch. Much of the unrest centered around Egypt’s handing over two small Red Sea islands to Saudi Arabia. While these protests indicate a deep-seated contempt that many citizens have for al-Sisi’s government, this latest development is not unexpected as Mr. al-Sisi continues to put down protests and criticisms of his rule by citizens and journalists.

The dispute between Morocco and the UN over the status of its MINURSO mission to the Western Sahara region continues to simmer, with the UN Security Council having voted last week to extend the mission for another year. This is despite the expulsion of international staff that took place in March 2016, following a reference made by UN Secretary-General Ban Ki-Moon to Morocco’s 1975 annexation of the region as an “occupation”. Seeking the “urgent restoration of full functionality” of the mission, the Security Council will be monitoring the situation through July 2016 to see if this full restoration does, indeed, take place. Morocco, for its part, has pledged to maintain an open dialogue on the subject and has said that it will continue to “study” the extension resolution and seek a solution that allows MINURSO to continue operations. Ahmed Boukhari, the UN representative for the Polisario Front which represents the Sahraoui people’s independence movement, praised the resolution but stated that it was “not enough”.

Tunisian president Beji Caid Essebsi made statements to an Italian magazine last week indicating that he would support a military campaign against the so-called Islamic State in Libya. His statements come in light of Tunisia’s shared borders with Libya, as well as the legacy of past attacks and threat of future attacks on Tunisian soil. This indicates a potential shift in Tunisian policy, after years of unchanging Tunisian opposition to any military interventions in Libya without explicit consent from a unified Libyan central government, which Libya currently does not have. President Essebsi did not clarify who he hoped would stage such an intervention, but said that he expected that it should be focused on eliminating specific targets and conducted in coordination with the United Nations.

Homophobic signs banning homosexuals from entry have reportedly appeared on the doors of several shops and businesses in Tunis over the past several weeks, with the Tunisian LGBTQ rights organization Shams renewing its call for an end to homophobia in Tunisian society and in the legal system.

Adding further weight to the European refugee and migrant inflows, 84 migrants are missing and believed drowned after their inflatable dinghy sank off Libya’s coast, claims the International Organization for Migration.  The Italian coast guard diverted a merchant ship to rescue 26 survivors and bring them to Italy.  Halting rescue efforts were rough seas and waves of almost 7 feet, common in the Mediterranean this time of year.  An estimated 27,000 refugees and other migrants have reached Italy by boat so far this year, most originating from Libya’s shores.  Also over the past year, 800 migrants are believed to have drowned in similar boat accidents trying to reach Europe.  As routes through Eastern Europe and the Balkans are made more difficult with tougher border controls, we should expect greater numbers of migrants and refugees to attempt the treacherous maritime routes that have taken so many lives thus far.

Libya’s newly-formed, U.N-backed unity government has urged this past week for military factions to delay an offensive against the ISIS-held city of Sirte. With several Western military units on the ground in Libya, serving in training and assistance capacities, Fayez Seraj, the current prime minister, was quick to claim that Seraj would be liberated  “by Libyan hands and not through foreign intervention.”  But with special forces units from the U.K, Germany, France, and likely the U.S on the ground, we cannot discount their involvement in whatever anti-ISIS action that will take place going forward.

April 10, 2018 Comments Off on Weekly Roundup: Israel kills 18 Palestinian demonstrators in Gaza, 60 killed and over 1,000 wounded in a suspected chemical attack in Syria, and Turkey delays negotiations over Syria’s Manbij region