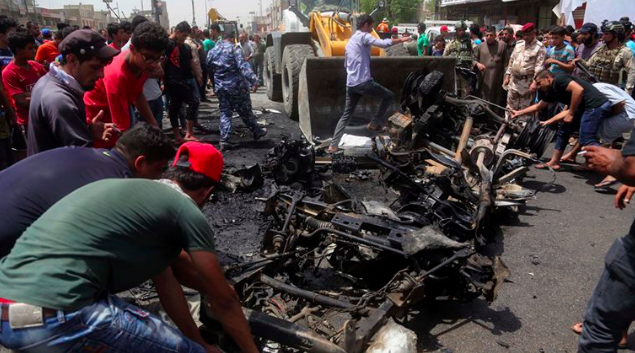 Jordan launched its nuclear program approximately a decade ago to address energy concerns. Currently, it is seeking to reach a nuclear proliferation deal with the United States on its uranium enrichment program. An agreement will potentially provide Jordan with access to U.S. technology, such as small modular reactors.

Amnesty International has stated that five rebel groups, al-Nusra Front, Ahrar al-Sham, Nureddin Zinki, the Levant Front and Division 16 were committing “war crimes and other violations of international humanitarian law with impunity,” including in Idlib and Aleppo where their acts include summary killings. Consequently, many civilians live in constant fear of being abducted, tortured and/or killed if they criticize the conduct of the armed groups in power or if they do not abide by their strict rules.

Syrian President Bashar al-Assad issued a decree to form a new cabinet on Sunday that allows key ministers to remain in their positions. This decision occurred after he appointed a new government led by Emad Khamis, the former electricity minister and a member of the Baath political party since 1977.The lineup announced on state media keeps the key defense, foreign affairs and interior portfolios unchanged.

The death toll from the Istanbul airport attack now totals more than 40 victims and wounded hundreds and the attack has since been deemed the deadliest attack in Turkey this year. The three bombers initially opened fire outside the airport before two of them went inside and blew themselves up. The third terrorist detonated his explosives outside at the entrance of the international arrivals terminal section.  Turkish officials believe that the suicide bombers who carried out the attacks were from Russia, Kyrgystan and Uzbekistan. Turkey has jailed at least thirty suspects over the attack.

Nineteen people have been arrested over recent attacks in Saudi Arabia.Saudi Arabia has arrested twelve Pakistanis and seven Saudis in connection with the suicide bombing on the prophet’s mosque in the city of Medina, as well as other attacks in Jeddah and Qatif. Saudi Arabia’s King Salman bin Abdulaziz Al Saud Saudi Arabia’s king decried extremism and vowed “the kingdom is fully determined to strike with an iron fist all those who aim at the minds or ideas of our dear young people.” While no group has claimed responsibility for the attacks it is believed that ISIL is responsible.

Yemen continues to grapple with violence throughout the country. This week was no exception. Suicide car bombers struck a military base near Aden International Airport. At least 10 Yemeni soldiers were killed and dozens were wounded as a result of the double car bomb attack. Gun battles followed the explosion leading to hours of clashes within the facility. Dozens of rocket propelled grenades were also launched at the base. The attack occurred on the Muslim holiday of Eid-al-Fitr.  Last week, four suicide car bombings in Yemen killed at least 42 people, including 35 soldiers and a child. The attacks targeted a security position in Mukalla, a southeastern port city in Hadramout province.

The U.S State Department has provided Qatar with a roadmap into reforming its labour sector within a recently published report on human trafficking.  Such efforts come at a crucial time for Qatar as its status as 2022 World Cup host is under fire from the International Labour Organization (ILO).  The ILO promised it would establish a commission of inquiry if the Gulf nation failed in reforming its oppressive labour regime.  As the U.S report provides a warning to Qatar, the clock is winding down on the ILO’s ultimatum for the country to undertake reforms.  If Qatar cannot overhaul its oppressive labor practices, it is likely the location of the 2022 World Cup’s will become more uncertain.

Oman’s Majlis Al-Shura has a been accused of exhibiting a lack of urgency for austerity. A hearing of proposals from an economic reform committee was delayed last Thursday when the council broke mid-session. The hearing has been deferred until November at the earliest. However, six of the recommendations were approved by the Majlis Al-Shura before the hearing was deferred. Given the economic challenges associated with its deficit and oil prices Omani officials have unveiled subsidy cuts, reduced benefits for public sector workers and have increased fees and taxes to make up for the shortfall. Oman and Bahrain are the most vulnerable Gulf countries due to a prolonged slump in oil prices.

The government of Bahrain has been accused of shutting down both internet and mobile coverage in a village beset by anti-government protests.  While protests are ensuing throughout the area automated Twitter accounts bombard the web with sectarian, anti-Shia content. These demonstrations in Diraz began on June 20 when Bahrain’s government stripped the country’s highest ranking Shia cleric and Dirza resident, Sheikh Isa Qassim, of his citizenship. After two weeks of being relatively unable to report on what is occurring inside Diraz, villagers have said that the connectivity shortages are an attempt to limit protests. Bahraini authorities quickly set up checkpoints around the village and have refused entry to anyone attempting to enter. The heavy police presence in Diraz also comes amid a wider crackdown that has been seen as a human rights violation.

A simmering political crisis in Bahrain can spiral into violence and weaken a key U.S. ally in the Persian Gulf and encourage Iran’s meddling in the country’s affairs. A bipartisan group of U.S. senators warned Secretary of State John Kerry and have stated that they are deeply alarmed concerning what is currently happening in Bahrain and its potential implications for U.S. interests in the region. In their letter they stated that the Bahraini government has taken steps targeting the country’s opposition, nonviolent human rights defenders and members of civil society. They further wrote that unless these actions are reversed “we fear that tensions in Bahrain could quickly intensify and destabilize an important United States ally.” Bahrain hosts the Navy’s 5th Fleet.

Iran is currently involved in four different major regional conflicts.  Two additional ones may emerge. The two dominant ones are its work against opposition and Islamist groups in Syria and against ISIL in Syria and Iraq. The two others include its regional competition with Saudi Arabia and its efforts against Israel in southern Lebanon and the Golan Heights. Also emerging is the concern over the ISIL threat in Afghanistan and armed struggle with the Kurdistan Democratic Party of Iran.

According to the United Nations Chief Ban Ki-Moon, Iran’s ballistic missile launches are inconsistent with the “constructive spirit” of the nuclear deal between Iran and world powers. In his first bi-annual report to the Security Council he called upon Iran to refrain from conducting ballistic missile launches. However, Ban has been reluctant to state whether the March missile launches flouted the council resolution, which was adopted a year ago as part of the deal to curb Iran’s nuclear work. The council is due to discuss Ban’s report on July 18. Iran’s Foreign Minister Javad Zarif has stated that the missile launches do not fall within the purview of UN Resolution 2231 and as such are not illegal.

The death toll from the deadly suicide bombing in Baghdad has risen to at least 300 people as a result of a truck bomb being used in a busy shopping district during Ramadan. This was the deadliest single attack in the country in years. It is believed that the terrorist likely successfully navigated a security checkpoint on the way in.  ISIL claimed responsibility for the attack. The Iraqi minister  Mohammed al-Ghabban, largely responsible for security in Baghdad, submitted his resignation two days after the deadly attack.

Anti-war protesters gathered in London as the Iraq Inquiry’s findings, also known as Chilcot Report, were made public this Wednesday, July 6th. The result of a seven-year official investigation examining Britain’s involvement in the 2003 Iraq invasion, the report has put former UK Prime Minister Tony Blair under scrutiny. The report concludes that Britain justified its participation using flawed intelligence, that Saddam Hussein’s regime did not pose an imminent national security threat, that the coalition invaded before all peaceful avenues had been exhausted, and that the invasion’s destabilizing aftermath was foreseen and ignored. The report has spurred public indignation and criticism towards Mr. Blair, with voices calling for accountability before international law.

Egypt has announced that it is considering retaliating Italy’s decision to halt the sale of military supplies to Egypt in protest to the killing of an Italian student earlier this year. An Italian Senate vote to stop the sale of military supplies, including spare parts for F16 warplanes, to express the country’s frustration with the lack of progress in the investigation into Italian student Giulio Regeni’s murder in Cairo. Italy has repeatedly expressed its concerns to Egyptian authorities and has complained that there has been a lack of cooperation on the part of Egyptian authorities. In April, Italy withdrew its Ambassador to Egypt for consultations.

In a rare interview, a Tunisian woman who lived as a prisoner of the terrorist organization ISIL described how they lived and operated undisturbed in Sabratha, Libya. This while the cell’s mainly Tunisian members organized attacks back in their home country of Tunisia. They noted how they lived normally in the city, neighbors knew them and lived a relatively normal life. This is illustrative of how the terrorist group continues to find space in Libya’s turmoil environment, as well as its spillover effect on neighbors such as Tunisia.

Saif Al-Islam, the second son of the late Libyan dictator Muammar el-Qaddafi, has been freed under an amnesty agreement after his death sentence was quashed, his British lawyer has claimed. He was held for five years by a militia in Zintan and was initially sentenced to death for his role in killing protesters during the country’s 2011 uprising. Saif Al-Islam is currently wanted by the International Criminal Court (ICC), which issued an arrest warrant for him for being an “indirect co-perpetrator” of crimes against humanity including murder and persecution. During the dictatorship, Saif was the dictator’s heir apparent.

ISIS has hastily expanded beyond its epicenters in Syria and Iraq since its proclamation as a caliphate in mid-2014. To date, there have been at least 126 ISIS-perpetrated or ISIS-inspired attacks in 23 countries excluding Iraq and Syria. This includes countries in North Africa, the Middle East, Europe, Southeast Asia, North America, Eurasia, Oceania, and South Asia. Among these countries are: Turkey, Tunisia, Yemen, Egypt, Libya, Kuwait, Saudi Arabia, Lebanon, the United States, Canada, Russia, Bangladesh, the Philippines, France, Belgium, Denmark, and Australia.

Weekly Roundup: Hariri speaks about his resignation, Saudi blockade intensifies famine in Yemen, and an earthquake hits the Iran-Iraq border

November 13, 2017 Comments Off on Weekly Roundup: Hariri speaks about his resignation, Saudi blockade intensifies famine in Yemen, and an earthquake hits the Iran-Iraq border