Tensions between the United States and Iran continued to rise this past week, as Iran’s Supreme Leader Ayatollah Khamenei accused United States President Donald Trump of lying about whether Iran has followed the terms of the 2015 nuclear deal. Trump has threatened to cancel the 2015 nuclear deal, which was brokered during President Obama’s term. Additionally, Trump has refused to Congress that Iran has upheld its end of the deal. Iran insists that its nuclear program is for peaceful purposes and that it has the right to nuclear energy.

The fate of the reconciliation agreement between the Palestinian Authority and Hamas remains unclear, as the Israeli security cabinet laid out criteria to be met before Israel would engage in negotiations with a Palestinian government that included Hamas. As part of these criteria, Israel is demanding that Hamas recognize Israel, disarm, cease terrorist activities, and break ties with Iran, one of its major sponsors. American President Donald Trump’s special representative for international negotiations, Jason Greenblatt, reiterated the United States’ support for these demands.

For the first time, Israel’s Holocaust museum, Yad Vashem, has bestowed the title “Righteous Among the Nations” on an Arab, Dr. Mohamed Helmy, for saving Jewish lives during the Second World War. Dr. Helmy, an Egyptian working as a doctor in Berlin during the 1930s, hid four Jewish acquaintances from Nazi authorities for much of the conflict’s duration. The award was not without controversy, however; Helmy’s family had previously refused to accept the award from an Israeli institution.

United Nations (UN)-backed talks intended to resolve differences between rival factions in Libya ended on Saturday after a month of activity. Led by UN envoy Ghassan Salame, this marks the conclusion of a second round of discussions focused on addressing political and military fractures in post-Gaddafi Libya. Salame indicated that dialogue between rival parliaments would continue, although an official date of resumption was not given.

Morocco recalled its ambassador to Algeria following the comments of Algerian foreign minister Abdelkader Messahel, who alleged that Moroccan banks “launder hashish money”. Messahel also stated that Royal Air Maroc, the kingdom’s state-owned carrier, is “carrying something other than passengers”. The remarks were made during a meeting with business leaders in Algiers. In response, the Moroccan foreign ministry issued a statement calling Messahel’s statements “false” and of “an unprecedented level of irresponsibility in the history of bilateral relations”. This is the latest in a series of rows between the two neighboring countries. Algeria and Morocco have strained diplomatic relations, in part over disputes concerning the Western Sahara. The Algerian-Moroccan land border has remained closed since 1994.

Dozens of Egyptian police were killed in clashes with militants in the country’s western desert on Friday near the Bahariya Oasis, marking one of the deadliest attacks this year on Egypt’s security forces. Over 50 policemen were killed in a shootout during a raid on a militant hideout, according to security officials who spoke anonymously. Local media reported similar death. The Egyptian government, however, disputed the figure. The Interior Ministry acknowledged the battle in the western desert but said it resulted in the deaths of 16 policemen.

The U.S.-Turkey visa spat continued last week with meetings between senior diplomatic officials. The U.S. Department of State said the meetings were “productive” and “substantial progress” was made, and Turkish Foreign Minister Çavuşoğlu said October 21st that the meetings had created a “positive atmosphere.” President Erdoğan blamed the visa crisis on outgoing U.S. Ambassador John Bass.

In domestic politics, the mayors of Ankara and Bursa announced that they will resign after President Erdoğan last week called on officials suffering from “mental fatigue” to leave their posts. Niğde mayor Faruk Akdoğan resigned on October 18th, and Mr. Erdoğan has also called on Balıkesir mayor Ahmet Edip Uğur to step down. Mr. Erdoğan called the move a “regeneration” in preparation for the 2019 local elections.

Justice Minister Abdulhamit Gül stated on October 22nd that Turkey was waiting for the U.S. to extradite Fethullah Gülen, the Pennsylvania-based cleric Turkey accuses of masterminding the July 2016 coup attempt. The statement came just before 86 businessmen accused of links to Gülen were scheduled to appear in court for trial on October 23rd.

This week, hundreds of free coding workshops were offered to local youth and refugees in Lebanon, Jordan, Palestine, Turkey, Egypt, and Iraq as part of Refugee Code Week 2017. With the support of partners, founding membres SAP and the Galway Education Center were able to train a large part of the target population in this year’s event, (5,000 more than last year’s edition), with more than 15,000 beneficiaries in Jordan alone. According to Albawaba, educational initiatives that incorporate digital language training may help to address the high youth unemployment rates in the region. The goal of this training is to build a highly-skilled workforce and successfully integrate refugees into this workforce.

US Secretary of State Rex Tillerson was welcomed in Riyadh by King Salman over the weekend. Secretary Tillerson attended the inaugural meeting of the Saudi Arabia-Iraq Coordination Committee with the King and Iraqi Prime Minister Haider al-Abadi. The Secretary of State also met with Prince Muhammad Bin Salman where he raised concerns about the impasse over the Gulf diplomatic crisis. He expressed concern over its resolution stating “I do not have a lot of expectations for it being resolved anytime soon”.

Moving on from his visit to Saudi Arabia, the US Secretary of State, Rex Tillerson, travelled to Qatar. Speaking in Doha, Tillerson claimed that Saudi Arabia is not willing to begin direct talks to resolve the Gulf diplomatic crisis.

Qatar signed three treaties and four memoranda of understanding with Singapore supporting closer economic cooperation. Citing historic relations of amicability between the two countries, the Prime Minister of Singapore expressed his desires for a Qatari-Singaporean cooperation in international fora.

In Aden, the UAE backed group, the Security Belt, arrested eleven Muslim Brotherhood-associated Islah leaders, including under-secretary Mohammed Abdul Malik, and stormed two of the party’s main bases. Previously allied with each other against Houthi rebels, this move condemned an already shaky alliance to the dust.

The Joint Investigative Mechanism (JIM), the OPCW’s inquiry into Syria’s April 4th chemical weapons use in Khan Sheikhoun, is expected to release its findings by Thursday. The JIM has twice found Syrian forces responsible for the use of chemical weapons. In the leadup to the report’s publication, the JIM’s mandate, set to expire in November, is the latest point of contention between the US and Russian delegations at the UN. Russia threatens to veto the mandate’s renewal, citing the “quality of the probe.” If invoked, this will mark the third time this year Russia has used veto power on matters relating to Syria and its chemical weapons program. 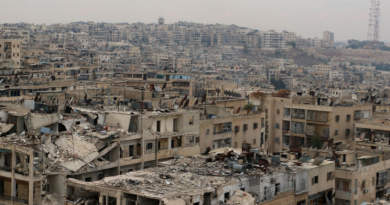