U.S. Vice President Mike Pence is set to travel to Egypt on Wednesday to meet with President Abdel Fattah al-Sisi in Cairo. Pence’s Middle East visit comes after a backlash in the Arab and Muslim worlds in response to President Trump’s decision to recognize Jerusalem as Israel’s capital. During his visit, Pence will focus on the U.S.-Egypt relationship and the two countries’ counter terrorism cooperation. He will recognize Egypt as an “important partner” in the region. Egypt has voiced its concerns over the Trump administration’s Jerusalem decision to the U.N. Security Council. The families of more than 20 Americans currently imprisoned in Egypt look to the Vice President’s visit as an opportunity to work towards the release of their loved ones. The administration has been silent about the American prisoners in Egypt, ignoring an August letter from Senator John McCain (Rep., AZ) encouraging action.

The United Nations Security Council is expected to vote today on an Egyptian-proposed resolution that would pronounce the Trump administration’s decision “null and void.” The U.S. is likely to veto the resolution.  Palestinian Authority (PA) President Mahmoud Abbas will convene a meeting of key PLO leaders in Ramallah this evening to discuss strategies and reactions to the decision. On Tuesday, President Abbas is expected to travel to Saudi Arabia to meet with Saudi leaders and discuss regional concerns over the Jerusalem decision. President Abbas has been involved in the outcry against the decision, including in actions taken at the United Nations and for cancelling a meeting with U.S. Vice-President Pence, yet remains close to the Saudi monarchy, who is enjoying a moment of unprecedented U.S. and Israeli support.

The Saudi prince leading the Kingdom through a series of sweeping reforms and anti-corruption crackdowns may be involved in the 2015 acquisition of a $300 million French chateau, according to the New York Times. It is the latest in a long line of purchases by the Saudi royal family of ultra-luxurious properties, and only deepens the divide between the Crown Prince’s skeptics, who believe his programs are political maneuvering, and those who praise his ambitious plans to reform the Kingdom.

A brief overview of the Crown Prince’s completed reforms: it was recently announced that women in the Kingdom will be allowed to drive trucks and motorcycles when the decision goes into effect in June 2018. The Prince also repealed the 35-year ban on cinemas in the Kingdom, opening a market whose estimated value is around $1 billion, with Hollywood studios jockeying to offer the first post-ban film in the Kingdom when cinemas open in March 2018. On the other hand the Prince’s recently announced, $500 billion futuristic megacity, designed to attract global investment has drawn skepticism. The city is called NEOM for “Neo-Mustaqbal” (the Arabic word for future), and represents the hope of Crown Prince Muhammad bin Salman reform the country’s previously oil-reliant economy.

Thousands of Libyans rallied in support of military leader Khalifa Hifter on Sunday. Hifter is the commander of the self-proclaimed Libyan National Army. In a televised address earlier that day, Hifter stated that the UN-backed government in Tripoli was now obsolete. He also stated that he would “fully obey the orders of the free Libyan people and no one else”. Many observers interpret these statements as hinting at Hifter’s intentions to run in Libya’s presidential elections, expected next year.

Over 450 migrants were rescued by Libya’s coast guards on their way to Italy this week. Moreover, the UNHCR launched an emergency evacuation to Niger from the North African country and an appeal to resettle at least 1,300 refugees by the end of March 2018.

In a meeting with Russian President Putin on December 11th, Turkish President Erdoğan said that Turkey would accept the inclusion of non-PYD affiliated Kurdish groups to Russian-led negotiations in Sochi between Syrian opposition groups. The talks broke down in November over Turkey’s objection to the invitation of PYD-affiliated Kurdish groups that it considers to be terrorist actors with links to the PKK, a separatist organization in Turkey. Erdoğan and Putin also discussed broader Turkish-Russian cooperation on energy issues, referring to pipeline projects ferrying gas between the two countries.

After an Organization for Islamic Cooperation (OIC) meeting in Istanbul this week that moved to recognize East Jerusalem as the capital of Palestine, Turkey announced on December 17th that it would open an embassy in East Jerusalem. The move is a response to U.S. President Donald Trump’s decision to recognize Jerusalem as the capital of Israel, and comes after Turkey chastised Arab leaders  for their “weak response” to the U.S. announcement.

On December 13th, Turkish police foiled an alleged PKK attack on the OIC meeting held in Istanbul after recovering a minibus containing explosives and arresting 11.

At a party conference on December 15th, nationalist Iyi Partisi spokesman Nuri Okutan called on opposition politicians to form a coalition in the second round of the 2019 presidential elections to defeat incumbent President Erdoğan. Okutan called the 2019 elections an opportunity to achieve peace through democratic change.

US Ambassador to the UN Nikki Haley recently displayed missile fragments from Yemen which show “undeniable evidence” that Iran is supplying the militant groups in that country. Responding to the accusation, Iranian defense officials have requested the fragments be delivered to Iran for inspection. As US-Iran relations continue to deteriorate amid fears of a growing military threat, some observers are indicating the  US has greater risk of nuclear war with Iran than North Korea. The US fear of a growing Iranian military presence has emboldened the Saudi monarchy in its regional proxy struggle against Iran, and the Saudi regime published a propaganda video depicting the invasion of Iran by Saudi forces last week.

Despite this tension the Iranian economy shows promising signs. A new IMF report out today predicts the Iranian GDP will grow 4.2% in 2017/8, but faces many challenges in its banking and investment arenas. In addition to restructuring the private development and investment sectors, the Fund called on Iran to increase its commitment to Anti-Money Laundering/Combating the Financing of Terrorism (AML/CFT) reforms. The report notably praised the high education level of Iranian women, and cited them as an “untapped source of growth and productivity,” and called for their inclusion in the market via reduction of “legal and social barriers and pay gaps.”

A week ago today, Russian President Vladimir Putin ordered the 6,000 Russian troops stationed in Syria to begin withdrawing. A group of around 2,500 Russian paramilitary contractors from the group CHVK Vagner is expected to remain in order to safeguard Russian energy installations and investment projects, in addition to conducting counter-IS operations. Russian and Syrian fighter jets launched an attack on Southern Aleppo and Damascus countryside, resulting in the displacement of hundreds of families as well as civilian casualties. 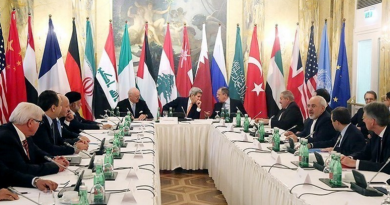 Weekly Roundup: Hariri speaks about his resignation, Saudi blockade intensifies famine in Yemen, and an earthquake hits the Iran-Iraq border

November 13, 2017 Comments Off on Weekly Roundup: Hariri speaks about his resignation, Saudi blockade intensifies famine in Yemen, and an earthquake hits the Iran-Iraq border