Assad government forces conducted heavy bombardments in the rebel-held Damascus suburb of Eastern Ghouta this week amidst heightening international attention. The latest assault began on February 19th, and continued throughout the week; the Syrian Observatory for Human Rights, a UK-based monitor group, reported that 520 were killed and over 2,500 were wounded over the course of the week. Pressure on the UN Security Council to address the issue culminated February 24th in a vote to establish a 30-day cease-fire, after the U.S. said Russia had a “unique responsibility” for the high death toll due to Moscow’s support for the operation. Despite the international agreement, Damascus resumed airstrikes just hours after the cease-fire approval, killing at least 77 in advance of a planned ground operation.

In Syria’s north, Turkey continued Operation Olive Branch in the Afrin region. On February 25th, Turkey announced that its forces had killed 2,018 PKK, PYD, or Daesh fighters, while Deputy Prime Minister Bekir Bozdağ said February 22nd that no civilians had been killed in Turkish operations. Also on the 22nd, Turkey deployed police special forces and Gendarmerie troops to Afrin, both of which fall under the Ministry of Interior, to assist in clearing urban areas liberated by the Army. Fears of an escalation flared with militia troops loyal to the Assad government entered Afrin on February 20th and when YPG fighters from Aleppo arrived on February 22nd to combat the Turkish offensive, and Turkish President Recep Tayyip Erdoğan warned that Turkish troops would treat them as enemy combatants unless they were sent to aid Turkish forces in securing the integrity of Syria’s borders. Accordingly, the Assad-loyal Syrian Army “Kurdish Hawks” division will deploy to Afrin to do just that on February 26th, joining the Turkish-led offensive in an apparent reversal of policy in Damascus.

The corruption scandal engulfing Israeli Prime Minister Benjamin Netanyahu deepened this week following new claims that a close aide may have attempted to stymie a corruption investigation into Netanyahu’s wife, Sara. The Israeli press widely reported that one of the Prime Minister’s aides had tried in 2015 to bribe a judge to close an investigation into allegations that Sara Netanyahu had misused government funds. The aide, Nir Hefetz, reportedly offered Judge Hila Gerstel the position of Attorney General in return for terminating the case. Netanyahu and Hefetz strongly deny these claims.

On February 22nd, Turkey strongly condemned a Dutch parliamentary resolution to recognize the 1915 massacre of Armenians by Ottoman soldiers as genocide. The Turkish Ministry of Foreign Affairs said the designation had “no place in history or justice.”

Relations between Turkey and Germany warmed this week as Germany approved 31 arms deals with Turkey on February 25th. Turkish Prime Minister Binali Yıldırım called February 15th for a “return to normalcy” with Germany, and Turkey subsequently released a German-Turkish journalist from prison on February 16th, followed by another German citizen freed on February 23rd.

Iran’s role in the conflict in Yemen is the central disagreement shaping today’s UN Security Council’s vote to renew targeted sanctions on Yemen. While the U.S. and France have been lobbying for a resolution that would call out Iran for allowing its weapons to fall into the hands of Houthi rebels, Russia has laid the groundwork for a veto of that resolution, and proposed an alternative one that does not directly mention Iran. Yemen continues to be the scene of a deadly proxy-war between Iran and the United States’ ally, Saudi Arabia.

Saudi Arabia has for the first time opened applications for women to join its military. Women have until Thursday to apply for positions with the rank of soldier in the provinces of Riyadh, Mecca, al-Qassim and Medina. Women will still be excluded from combat roles.

At least 14 people have been killed and 40 wounded when car suicide bombers and gunmen tried to storm the headquarters of a Yemeni counter-terrorism unit in Aden on Saturday, security and medical sources said. Security sources said two suicide bombers detonated two cars laden with explosives at the camp’s entrance while six gunmen tried to storm the facility. Islamic State claimed responsibility on its ‘Amaq news agency.

Senior Emirati, Saudi and Qatari leaders will meet with U.S. President Donald Trump in the next couple of months amid efforts by Washington to try to resolve a dispute between the Gulf neighbors, according to US officials. Abu Dhabi Crown Prince Sheikh Mohammed bin Zayed al-Nahyan of the United Arab Emirates, Saudi Crown Prince Mohammed bin Salman, and Qatar’s Emir Sheikh Tamim bin Hamad al-Thani are all planning to have bilateral visits with Trump in March and April.

On February 25th, Iraq’s Central Criminal Court sentenced 15 Turkish women to death and one to life in prison for membership in Daesh. The Iraqi Foreign Ministry also said February 22nd that Baghdad has turned over to Russia four women and 27 children suspected of ties to ISIL.  Human Rights Watch has objected to Iraq’s punitive treatment of former ISIL members and their families, alleging excessive sentencing of women and punitive denial of documentation of relatives of convicted ISIL fighters.

Lebanese President Michel Aoun traveled to Baghdad on February 20th for talks with Iraqi President Fouad Massoum and Prime Minister Haidar al-Abadi on strengthening relations and combating terrorism. Meanwhile, the leader of Iran-backed Shi’ite militia Harakat al-Nujaba released a statement on February 21st saying that his group would “cleanse” the American presence from the country.

Lebanese authorities interrogated a man on February 26th suspected in the February 6th killing a Filipina maid in Kuwait. Nader Essam Assaf, a Lebanese national, was arrested with his wife in Syria on February 21st before being turned over to Lebanese custody by Syrian authorities. The case has sparked outrage in Kuwait, and was one of several deaths prompting the Philippines to stop sending workers to the Gulf nation until investigations were carried out.

On February 21st, Lebanese intelligence arrested a Syrian man in the city of Tripoli on charges of managing finances for ISIL. The man was responsible for collecting funds for the ISIL division based in Abu Kamal, a town near the Syrian-Iraqi border that was retaken by the Syrian Army in 2017.

On Sunday, Prime Minister Hani Mulki announced a cabinet reshuffle in response to ongoing unrest over the struggling economy and rising prices. Jordanians in Salt and around the country again took to the streets last Friday to protest tax increases on food and consumer items – including a doubling of the price of subsidized bread – and to demand Mulki’s resignation. He appointed Jafar Hassan, the king’s chief of staff, to serve as the deputy Prime Minister for economic affairs, tasked with overseeing public spending cuts previously agreed with the IMF.

During his visit to the region, U.S. Secretary of State Rex Tillerson re-upped American aid to Jordan, signing a memorandum of understanding with Foreign Minister Ayman Safadi for $1.3 billion annually over the next five years. The agreement appeared to reaffirm the close ties between the two countries, whose relationship hit a snag following the U.S. decision to recognize Jerusalem as the capital of Israel and Jordan’s subsequent vote to condemn the decision in the U.N. General Assembly.

An Egyptian court put former presidential candidate Abdel Moneim Abol Fotouh on a terrorism list last week, following his arrest for alleged contacts with the banned Muslim Brotherhood. Abol Fotouh, who leads the Strong Egypt party, was arrested after a visit to London where he gave interviews sharply critical of President Abdel Fattah al-Sisi ahead of presidential elections next month. He was also among the first of several high-profile Egyptians to call for a boycott of the election last month.

Representatives of Tunisia’s tourism industry announced last week that tourism will reach a record high this year, fully reversing the damage done to the industry by a series of attacks in 2015. Tunisia expects to receive 8 million tourists this year, which will surpass the pre-attack level of 7.1 million in 2014. British tour operator Thomas Cook announced last month that it plans to resume trips to Tunisia in May, for the first time since 30 Brits were killed in an attack on the beach in Sousse in 2015. Tourism accounts for 8% of Tunisia’s GDP, and more tourism dollars will surely bolster Tunisia’s struggling economy and help raise weak foreign currency reserves.

The UNHCR is expressing alarm that armed groups have prevented several hundred Libyan families from returning to their homes in the city of Tawergha. Refugees were displaced from Tawergha in 2011, when the city became the site of intense fighting during the Libyan Civil War. In August of 2011, Gaddafi’s forces captured Tawergha and forced 40,000 people to leave. Libya’s Presidency Council declared on February 1 that Tawerghan refugees should be allowed to return to their homes. Some 2,000 Tawerghans attempted to reenter the city but were stopped by armed forces, and many are now surviving in dire conditions at temporary sites outside Tawergha. 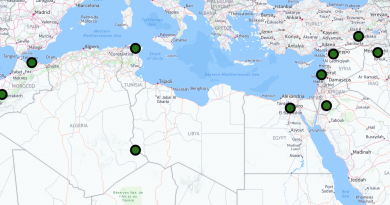