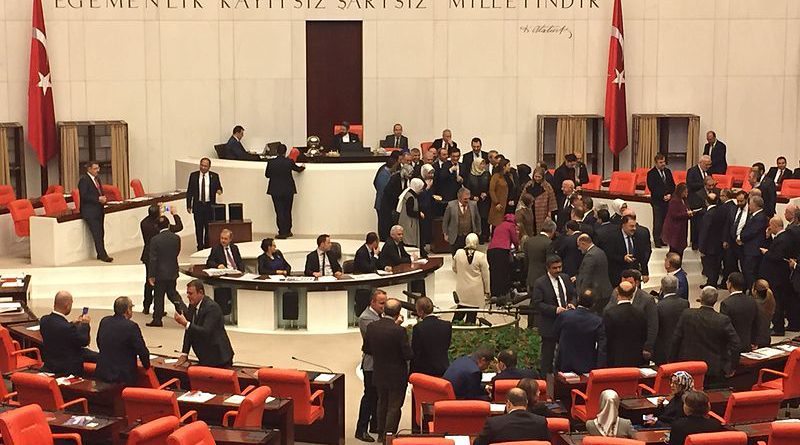 This is the first in a three part series on Turkish constitutionalism one year after the 2017 constitutional referendum. Part 2, Part 3

Constitutions are nations’ mission statements, and articulate pre-political commitments that turn residents into citizens, and borders into a nation. In Turkey, generations of political leaders have used constitutional reform as an opportunity to set their political agenda and highlight their priorities. The 2017 referendum must be understood in the context of a democracy where voters have experienced successive constitutional reforms aimed at complementing the mission each new generation of leaders gives itself. A view of modern Turkish history reveals the tendency of leaders to use constitutional reform to address deficiencies in their respective administrations, and reflects the latent tension between populism, military intervention, and constitutional integrity.

The modern Turkish Republic was born out of the chaotic end to the Ottoman Empire. Part of the Tanzimat reforms, aimed at establishing modern state institutions to regain a competitive edge in European politics, included the introduction of a constitution in 1876 that tried to turn the Sultan’s rule into a constitutional monarchy. That attempt fell by the wayside after a humiliating defeat at the hands of the Russian Empire in the 1878 Russo-Turkish war, a crisis which allowed the Sultan to regain power ceded to the reformers. The Sultan, Abdul Hamid II, stayed in power until 1909, when the Young Turk movement forced Abdul Hamid II to cede power in the face of a nascent military coup. That group of reformers had little time to focus on building domestic institutions before they found themselves ensnared in a decade of war that included the Balkan Wars, World War I, and the Turkish War of Independence against European occupation. The 1876 constitution proved insufficient to restrain the Sultan in the midst of the crisis of the Russo-Turkish War, and it gave ammunition to the Young Turks in 1908 in a manner that later constitutional politics would echo.

The Ottoman Empire’s disastrous experience in World War I gave birth to the modern nation of Turkey, which was governed by a constitution adopted in 1920 and amended in 1924. The 1920’s saw an aggressive modernization movement in Turkey that Atatürk accomplished largely through force of personality. The global effects of the Great Depression and the run up to World War II took up much of the decade before Atatürk’s death in 1938 and added to this sense of crisis that inhibited democratic consolidation. The early Republican era saw immense value placed on the strength of Atatürk as a leader, rather than widespread faith in the strength of the Republic’s new institutions. The future premiers of Turkey would come to view the constitution as a tool to effect sweeping political changes, rather than a check on their individual authorities.

The beginning of the Cold War and the security threat posed by the Soviet Union prompted Turkey to seek membership in NATO. To become part of the democratic West, Turkey would have to become a democracy at home. Competitive multi-party elections were held for the first time in 1950, and lead to the first electoral defeat for Ismet Inönü and Atatürk’s People’s Republican Party (CHP). The Democrat Party (DP) emerged victorious with the leadership of Adnan Menders, and called for an increased role for religion in public life and a populist economic agenda. Adnan Menderes became prime minister, and Turkey became a NATO member in 1952.

Though Menderes was re-elected twice, an economic downturn hit Turkey during his tenure and the DP’s popularity began to decline. As disruptive protests broke out in the streets, Menderes shut down critical press outlets and worked to harass other opponents of government. The excesses of the Menderes administration laid bare the shortcomings of the 1924 constitution, which failed to avert both the government’s actions and those of the military junta which rose up to depose it. On May 27th 1960, a junior group of Turkish officers seized power in the dead of night, and read out an announcement that they had taken over the government in order to “save democracy.” The junta accused the Menderes government of compromising the integrity of the 1924 constitution, invalidating both the rule of the current government and constitution itself. The military regime tasked a group of law professors with writing a new constitution that would limit future leaders’ ability to seize power for themselves.

Overthrowing an elected government is an ironic way to preserve democracy. Despite the contradiction between means and ends, the constitution that followed the 1960 coup was the most liberal Turkey ever saw. It included a bicameral legislature that complicated any populist leader’s ability to seize power and offered more protection over individuals rights. Apart from the military government’s aspirations for a return to reliably democratic governance, they still prioritized securing themselves against future reprisals from a government composed of the recently-executed Menderes’ political allies. While the 1961 constitution had sought to prevent a destabilizing populist from assuming too much power, it made governing difficult. The paralysis it brought to the government lead General Kenan Evren to lament the state of political deadlock, blaming the intransigence of politicians for the 1980 coup which he led.

The period of the 1961 constitution was a time of extreme chaos and sectarianism in Turkish public life.  Competitive multi-party democracy returned in 1965 with the election of the Justice Party, but escalating sectarian violence prompted the military to suspend the constitution and force Prime Minister Suleiman Demirel to resign on March 12, 1971. Martial law was again declared in 1978, followed by a 1980 military coup with General Evren at its head. The 1980 military government restructured Turkish society to provide the order and security that was so absent in the 1970s by sponsoring yet another constitution. The military government hoped the new constitution would compensate for the flaws in the prior constitution that had so stymied everyday governance and undermined parliamentary authority.

The 1982 constitution approached the challenge of maintaining order and projecting democratic principles in two ways. One was the codification of political crimes such as instigating public disorder, insulting the state, or offending the status of secularism. Apart from these ideological commitments, the 1982 constitution sought to ensure that committed Kemalists would play an indisputable part in the governance of Turkey regardless of their electoral fortunes. The judiciary became a key institution in maintaining the secularist project by means of the newly-established Constitutional Court, which could ban political parties who broke with Kemalist ideals.

The Turkish Constitutional Court is a court of original jurisdiction that focuses on resolving political disputes. Political parties could use this body to resolve disputes about legislation, but could also bring cases seeking to close parties for their rhetoric. In the years following the adoption of the 1982 constitution, this latter function was used to attack measures passed by Islamist parties. This happened twice since in the 1990’s –  first in 1998, when the Welfare Party was shut down, and again in 2001, when the Virtue Party was banned. The European Union criticized both closures as incompatible with democracy.

It appeared that the military government had accomplished its goal. Secularism retained its privileged position in Turkish public discourse, and the Constitutional Court could shutter parties that threatened this status quo with religiously-tinged rhetoric. In the aftermath of the 1998 shutdown, a local Istanbul politician named Recep Tayyip Erdogan was sent to jail for several months for just such an attack on secularism. After his release and the 2001 disbandment of the Virtue party, he rose to prominence as the founder of the new Justice and Development party (AKP). His election in 2002 was praised in the West as a victory for democracy, though the threat of military or court intervention persisted. The next decade and a half would witness the meteoric rise of Mr. Erdoğan’s party and personal political career, but it would also trigger monumental shifts in the legal machinery of the modern Turkish state.