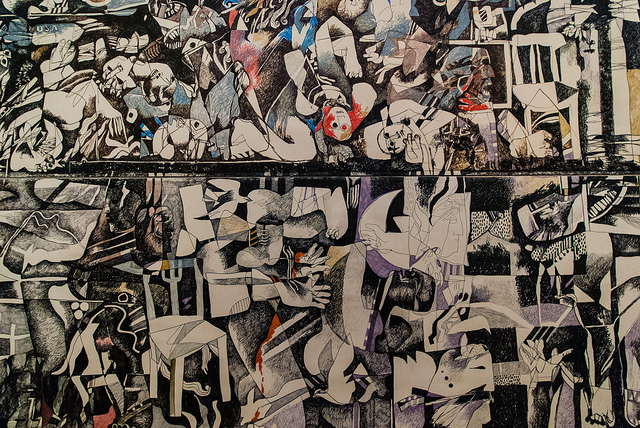 Described as one of the “greatest fusers of politics and art,” Sultan Sooud al-Qassemi has spent much of his life studying – and talking about – Arab art. Between founding the Barjeel Art Foundation, an Emirati-based initiative that collects and preserves Arab art, to live-tweeting the events of the Arab-spring to millions of Twitter users, al-Qassemi has a reputation for breaking silence on topics most members of an Arab royal family would be reluctant to touch. On February 7th, at an event hosted by the Harvard Kennedy School’s Belfer Center for Science and International Security, al-Qassemi gave a talk entitled “Politics of Modern Middle Eastern Art” in which he explored the greatest hits of modern political Arab art.

Al-Qassemi began by situating the audience in early 1940s Egypt. He opened with an image of the Cairene “Art and Liberty Group” (jama’at al-fan’ wal hurriyyah), whose manifesto, “Long Live Degenerate Art,” remains emblematic of the solidarity movement between Arab and Jewish artists. The group frequently published anti-nationalist and anti-colonial works in Arabic, which allowed their critiques of British authority and military intervention to remain largely unregulated. As a part of the burgeoning global surrealist movement, the Art and Liberty Group cultivated an international reputation and network that stretched from Cairo to Munich, Paris, and beyond.

The intellectual and artistic milieu of the Middle East flourished throughout the 20th century, but usually did so underground. Art initiatives, al-Qassemi described, were always underestimated by Arab governments for their potential to facilitate serious political discussion. In spite of heavy censorship and frequent crackdowns on civil society groups, artist-led initiatives managed to escape the purview of dubious and watchful government eyes. Intellectuals, journalists, playwrights, politicos, and even archaeologists could gather under the pretense of “art” in order to exchange news and ideas on politics.

In his talk, al-Qassemi emphasized the skillfully coded politics of Arab art in a time when political expression was extremely limited. The surrealist art movement took root throughout the Arab world starting in the late 1930s, and allowed for the use of bold colors, exaggerated figures, and most importantly, the embedding of hidden messages. Abdul Hadi El Gazzar, acclaimed as one of the most politically active and prolific Middle Eastern artists of the 20th century, painted a quiet but stinging critique of the Egyptian monarchy in his work “The Theater of Life and Hunger” (1952). Kadhim Hayder, a painter from Iraq, used surrealism to shroud his politics in religious imagery and apolitical scenes, as in his work,“Martyr’s Epic” (1965).

It would be a huge disservice to the history of Middle Eastern art not to touch on the influence of pan-Arabism, a prominent theme in contemporary Middle Eastern politics and artistic expression. Gamal Abdel Nasser, widely regarded as the face of the 1950s pan-Arabist movement, was depicted as larger than life in paintings across the Arab world. Hamed Ewais, for example, captured the ethos and spirit of Egypt right after Nasser nationalized the Suez Canal. Mohammed Sabry depicted Nasser in a similar manner in “The Cairo Agreement.” Painters not only from Egypt but from across the Arab world paid tribute to Nasser in their art, reflecting the influence of Nasser’s ideological movement on identity construction and solidarity-building throughout the region.

Arab artists often used their art to comment on the political affairs of their own countries or the Middle East more broadly. However, many Arab artists also “look[ed] beyond their own borders” to capture events in other parts of the world. Iranian painter Bahmad Mohasses, for example, painted “Requiem Omnibus” (1968) in response to the assassination of Martin Luther King Jr. Aref Rayess, a Lebanese artist, portrayed French colonial violence in Algeria. Ismail Shammout, also a Lebanese artist, juxtaposed violence in Palestine with the events of Vietnam in a poster redolent of Alan Wood’s Iwo Jima photo.

Known informally as “the issue” (al-qaddiyya) in the Arab world, the plight of Palestine is the subject of political discussion as much as it is the subject of artwork. Al-Qassemi showed artwork from the Emirates, Syria, Iran, and Lebanon that characterized a variety of responses by artists around the region to the occupation of Palestine and its consequences for the region as a whole. In particular, al-Qassemi pointed to Suleiman Mansour’s “Camel of Heavy Burdens” (circa 1980) and Dia Azzawi’s 1982 “Sabra and Shatila” (also dubbed the “Arab Guernica”) as examples of iconic contemporary artistic reactions to the consequences of the occupation.

Contexts and Consequences of Political Art

In his remarks, al-Qassemi reminded the audience that creating political art did not come without its share of grave consequences for Arab and Middle Eastern artists.The fear of jail-time, disappearance, and torture were real among artist communities. El Gazzar was imprisoned for some time; Inji Efflatoun, another Egyptian artist, spent time in jail for her political activism. Still, Arab and Middle Eastern artists persevered. As a tradition, it is “much more than just calligraphy and protest graffiti,” al-Qassemi commented.

Several questions from the audience prompted further discussion, underlining the significance of the artwork presented. One audience member asked about al-Qassemi’s position on artwork created “in the service of power and problematic authority figures.” Al-Qassemi contended that studying “pro-government” art is extremely important from an anthropological perspective. Firstly, it serves as a permanent preservation of a viewpoint that, even if controversial, is useful to analyze. Secondly, it allows for an examination of the evolving relationship between governments and artists, within the context of specific points in time.

Al-Qassemi also discussed the issue of accessibility of art during the audience discussion. He explained that, unsurprisingly, elite biases are inescapable when studying paint medium. Many famous artists – Inji Efflatoun, Gazbia Sirry, and Abdul Hadi El Gazzar, among others – came from privileged backgrounds with unfettered access to higher education in their early years. Their artwork spent years circling within the upper echelons of society, residing in hotels and museum exhibits or being purchased privately by wealthy individuals. Even so, al-Qassemi concluded with an appeal to the audience to always appreciate art within its own context, and emphasized the importance of studying contemporary Middle Eastern art alongside the political events surrounding its creation. 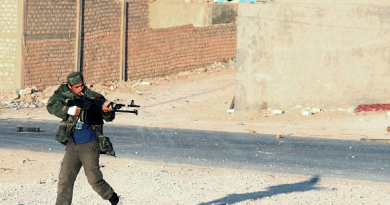 Is tribalism the root of Libya’s ills? 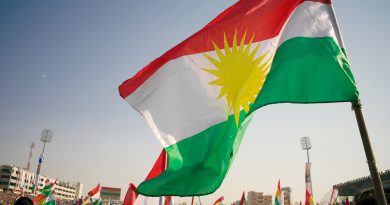