On March 11th, President Abdelaziz Bouteflika announced his withdrawal from the Presidential race and the postponement of elections after weeks of protests against his plans to seek a fift term in office. Algerians had continued to protest through the week after Bouteflika’s March 3rd announcement of plans to seek a fifth term in office. Bouteflika, who is 82, suffers from a range of ailments and had been receiving treatment in a hospital in Switzerland since late February. He returned to Algeria on March 10th amid amid heightened protests and tight security.

Several human rights organizations have accused Formula One of overlooking cases of persecuting, torturing, and sexually abusing activists who protested against the Bahrain Grand Prix. Formula One has admitted to having concerns about the situation, but sent a letter to Human Rights Watch and the Bahrain Institute of Rights and Democracy (BIRD) on March 6th defending the Bahraini government, claiming that Bahraini officials had promised that anyone is free to criticize Formula One in Bahrain.

Egyptian authorities stated on March 7th that seven militants were killed during a shootout with police in Cairo. An Interior Ministry spokesperson said the militants had ties to the Muslim Brotherhood, and claimed police discovered a stockpile of weapons and ammunition in their possession.

On March 4th, a group of Egyptian lawyers said that security forces had detained roughly 70 people for their involvement in protests stemming from a deadly train crash that killed dozens in late February. Egyptian authorities made arrests relating to the train crash in early March, but activists continued to organize in protest of the dilapidated state of Egypt’s transport infrastructure after the government failed to announce plans for a systematic infrastructure overhaul. The campaign of arrests has also swept up activists who organize around other issues, including a 19-year-old trans woman named Malak al-Kashif, who has spoken publicly about her experience as a trans woman in Egypt and has been described as an LGBTQ activist.

Iranian President Hassan Rouhani arrived in Baghdad on March 11th for his first official visit to Iraq. The visit is interpreted as a signalling from Iran of its continued interest in Iraq, an area of tension between Tehran and Washington DC. Iran also seeks increased economic ties with Iraq, in order to offset wide-ranging US economic sanctions on Tehran. Iraq has continually rejected US economic sanctions against Iran, a position Iraqi President Barham Salih reiterated on March 10th.

On March 7th, Iranian Supreme Leader Ayatollah Ali Khamenei appointed Hojjatoleslam Raisi, a conservative who lost the 2017 Presidential election to Hassan Rouhani, as Judiciary Chief of Iran. The move comes after Khamenei appointed former head of the judiciary and fellow conservative, Sadegh Amoli Larijani to head the Expediency Council. While his new appointment positions Raisi to undermine the influence of moderates such as President Rouhani, many interpret the reshuffle as undermining Raisi’s chances of taking over after Supreme Leader Khamenei, who is 80 years old. Many activists, as well as the US government, protested the appointment by pointing to Raisi’s role in the 1988 mass execution of prisoners following the end of Iran’s war with Iraq.

Iran’s President will make his first official visit to Baghdad this week. Iran is attempting to counter American influence and bolster ties with its neighbor. As Baghdad continues to develop and recover from the war against Daesh, ISIS still poses a threat in pockets in northern Iraq.

On March 10th, Kurdish parliamentarians in Erbil reached an agreement on the allocation of seats in the body’s permanent committees. The two leading political parties, the Kurdistan Democratic Party (KDP), and Patriotic Union of Kurdistan (PUK), continue to struggle over key ministerial posts.

Documents revealing the high salaries of three employees in the Ministry of Justice were leaked on social media platforms this week. Prime Minister Razzaz canceled the positions on March 3rd after the documents generated a wave of public anger. In a statement, Razzaz called for the cessation of all new appointments recently made in government institutions and departments.

King Abdullah traveled to the United States on March 10th to meet with members of Congress on a range of issues, particularly developments related to Palestine. Tensions have risen over al-Aqsa mosque’s al-Rahma gate after Israeli police banned officials in charge of the endowment funding the property from entering al-Aqsa compound for 40 days. Jordan’s Ministry of Awqaf said Israel’s actions against the Muslim Waqf (Endowment) Council in Jerusalem was “an intimidation of the Awqaf Council members and direct targeting of the Hashemite guardianship of Islamic and Christian holy sites.

Kuwait’s National Assembly intends to pass amendments to change labor laws in the private sector in late March. The law will be the first ‘pro-expat’ legislation in nearly nine years, the Kuwait Times reported. The annual leave entitlement for the 1.7 million expats working in the private sector is expected to increase to 40 days annually, as are monthly salary allotments. Kuwaiti lawmakers are pushing to rebalance the country’s national demographics, as foreign residents currently make up 70 percent of the 4.6 million population.

On Friday March 8th, Hezbollah leader Hassan Nasrallah appealed for donations from its popular base as the movement comes under financial pressure due to US-led sanctions. The appeal follows the UK’s February decision to ban Hezbollah’s political wing as a ‘terrorist organization.’ On March 7th, Lebanon’s president, Michel Aoun, spoke up in defense of  Hezbollah, telling a visiting British official that Hezbollah is part of the Lebanese people and is represented in the Cabinet and parliament.

On March 7th, Lebanon warned Israel not to violate maritime borders in construction of a new gas pipeline. Beirut has an unresolved maritime border dispute with Israel over a sea area of 860 sq km extending along the edge of three of Lebanon’s southern energy blocks.

The Tripoli-based Libyan government and its allies at the United Nations are growing increasingly concerned that east Libyan military commander Khalifa Haftar and his Libyan National Army (LNA) have plans to advance on Tripoli. While any rumors of mobilization remain unconfirmed, a number of LNA troops have left the country’s southern region– which is now primarily under LNA control– and are currently reinforcing a military base in the centrally located city of Jufra. On March 9th, Tripoli’s Matiga airport was closed due to unidentified drone activity, which contributed to rumors that Haftar is working with people inside the capitol to further his military campaign.

In a demonstration of some 8,000 Palestinians in Gaza on March 8th, one was killed and 42 were wounded by Israeli security forces. The Israeli forces stated that Palestinian demonstrators had thrown rocks and explosives and tried to breach the security fence in order to enter Israel. This most recent demonstration at the separation fence between Gaza and Israel, demanding that Palestinians be allowed to return to the homes they were expelled from in 1948, marked a continuation of the weekly demonstrations that have occurred there since March 30th last year. Gaza health authorities say that in total, 200 Palestinians have been killed by Israeli forces in these protests since they began nearly 12 months ago.

Qatar reportedly offered $880 million to FIFA to win the right to host the 2022 World Cup, according to the Sunday Times. Al-Jazeera, a state-funded news channel in Doha, apparently offered FIFA $400 million for broadcasting rights 21 days before Qatar was announced the winner. Another $480 million is reportedly offered by Qatar to FIFA three years later. FIFA declined to comment on the allegations.

On March 10th, the brother of imprisoned activist Loujain al-Hathloul announced that her trial will begin on March 13th in Saudi Arabia’s Specialized Criminal Court. Al-Hathloul is one of several women’s rights activists detained last spring in the run-up to the country’s lifting of its female driving ban. She stands accused of threatening the security and stability of Saudi Arabia.

On March 9th, Saudi Energy Minister Khalid Al-Falih met with his Indian counterpart Dharmendra Pradhan in India to discuss the Kingdom’s investments in India’s oil reserves. Saudi foreign minister, Adel al-Jubeir, is scheduled to visit India on March 11th, following up on meetings during the Crown Prince’s visit to the country last month.

The US-backed Syrian Democratic Forces (SDF) resumed its offensive on the last Islamic State-held town of Baghuz in the Deir ez-Zour governorate on March 10th. US President Donald Trump declared on February 28th that the group was entirely defeated.

Pursuant to a September 2018 agreement, Russian and Turkish forces commenced joint patrols in opposition-held Idlib on March 8th. Idlib remains the last opposition stronghold in Syria, and is under pressure from Russia and the Assad government to capitulate to Damascus.

On March 11th, UNICEF announced that 2018 was the deadliest year for children during the Syrian conflict. At least 1,106 children killed last year, with unexploded ordinances, or mines, being the leading cause.

Separately, parliamentarians failed to agree on candidates to fill vacancies on Tunisia’s Constitutional Court. In a March 6th vote, Nidaa Tounes and al-Horra representatives remained dissatisfied with three candidates who enjoy the support of Ennahda. International observers have criticized parliament’s obstinacy on the Constitutional Court nominations, pointing to the obstacles an incomplete court poses to evaluating and challenging discriminatory legislation and ensuring judiciary independence.

After attempting to block entrances to the central street where thousands of women marched to celebrate International Women’s Day on March 8th, Istanbul police dispersed the crowd with rubber bullets, tear gas, and dogs. President Erdoğan later said protesters were disrespectful to Islam, citing footage where they chanted during the call to prayer.

In an interview on March 6th, President Erdoğan said that Turkey will move forward and receive S-400 air defense missiles from Russia in July despite the system’s incompatibility with NATO regulations. Turkey and Russia conducted joint exercises in the Black Sea between March 6th and 8th.

Meanwhile, Turkey—labeled by the Committee to Protect Journalists as the “worst jailer” of journalists in 2018—refused to accredit three German journalists, providing them with 10 days to leave the country.

Suhail Al Mazroui, Minister of Energy and Industry of the UAE announced on Twitter that the country will be cutting back oil outputs until the market begins to stabilize. Crude oil closed at $65.81 per barrel on March 8th, an increase from turbulent prices in early January. The output cuts, which seek to take 1.2 million barrels off the market every day, took effect in January.

On March 10th, fighting broke out between warring parties in Yemen, the first major clash since UN-brokered ceasefire efforts. The ceasefire was meant to ease the humanitarian catastrophe unfolding in Yemen, but frequent violations and the difficulties of enforcement have impeded efforts to transform the agreement into a basis for progress on de-escalating the conflict between the Saudi-led coalition and Houthi fighters.

Separately, Saudi Arabia’s air defense systems shot down a drone heading to Abha, a residential area in Saudi Arabia on March 8th according to Colonel Turki al-Maliki, a spokesman for the Saudi-led coalition prosecuting the war in Yemen. 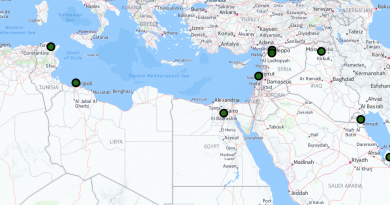 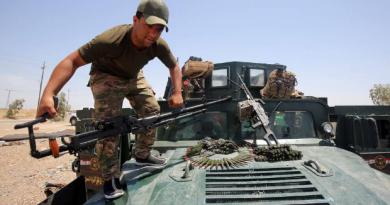