Police and protesters clashed in Algeria on April 12th amid demonstrations for the removal of new interim President Abdelkader Bensalah. Hundreds of thousands marched in Algiers, many chanting “No to Bensalah” and using the slogan “They will all leave” on social media. Police used water cannon and tear gas against demonstrators and said they they arrested 108 “infiltrators.”

Meanwhile, Algeria’s magistrates, who play an important role overseeing and certifying elections, said on April 13th that they will boycott a July 4th presidential election in support of the protest movement. In rejecting the July poll, the magistrates said that elections cannot be free and fair if they are held under the same judicial framework and institutions of the Bouteflika government.

Egypt’s parliament is set to vote on April 16th on constitutional amendments including an extension to President Abdel Fattah al-Sisi’s current four-year-term. According to a recent draft, the proposed amendments could allow Sisi to stay in power until 2030 by extending his current term by two more years and allowing him to run once again in 2024. Egyptian state television reported that parliament’s legislative committee had approved the amendments and that they were ready to go to the full house for a vote.

In other news, President Sisi met with Libya’s Khalifa Haftar in Cairo on April 14th, as Haftar’s forces continue their advance in Libya on the capital Tripoli. Egypt is among Haftar’s closest regional allies. A statement from Sisi’s office did not mention Haftar’s offensive directly but “confirmed Egypt’s support for efforts to combat terrorism and extremist groups and militias in order to achieve security and stability for the Libyan citizen.”

As of April 14th, 76 Iranians have died in the floods which have ravaged the country since March 19th. According to officials, Iran have suffered $2.2 billion in damages in 25 of Iran’s 31 provinces. Also on April 14th, the Iranian Red Crescent reiterated charges that US sanctions are blocking foreign aid from entering the country, pointing to funds from the International Red Cross and the European Union that had yet to arrive in Iran. One week prior, President Rouhani also pointed to the detrimental impact of US sanctions on relief work, while US Secretary of State Mike Pompeo accused the Iranian government for mismanagement.

Iranian Foreign Minister Javad Zarif on April 14th criticised the European Union’s slow implementation of a payment mechanism designed to counter US sanctions and enable trade with Iran, known as INSTEX. The critique came the same day that the French Ambassador to the United States, Gerard Araud, tweeted about possible future French sanctions on any future Iranian nuclear program after the expiration of the JCPOA. The now-deleted tweet caused consternation in Iran, and led Tehran to summon France’s Ambassador to Iran, Philippe Thiebaud, for an official protest to and clarification of his colleague’s remarks. On April 15th, Foreign Minister Zarif followed up with a tweet to “remind” Iran’s European partners of Iran’s right to enrich uranium under the the Treaty on the Non-Proliferation of Nuclear Weapons.

In a statement on April 13th, the Fateh coalition of Shi’ite militia groups gathered in Najaf to denounce US President Donald Trump’s April 8th decision to label the Iranian Islamic Revolutionary Guard Corps (IRGC) as a terrorist group. Many Shi’ite militias in Iraq receive training, funds, and equipment from Iran. Iraq opposed the designation, and attempted to dissuade the US from moving forward with its implementation, according to Prime Minister Adel Abdul Mahdi.

Also on April 13th, Iraq’s Ministry of Transport announced it was studying a project proposed by Tehran to link Syria, Iraq, and Iran via railway. The announcement came a week after Iranian First Vice President Eshaq Jahangiri spoke of a plan to connect the Persian Gulf to the Mediterranean, which would include the Shamalamcheh-Basra railway linking Iran and Iraq.

The Muslim Brotherhood released a statement on April 9th saying that it fully supports King Abdullah’s hardline stance on Israeli actions in Jerusalem. The group wrote that it rejects the United States’ Israeli-Palestinian peace plan.

On April 7th, Prime Minister Omar Razzaz announced that Jordan is seeking a $1 billion dollar loan over 30 years with the World Bank, at a four percent interest rate. The loan is intended to assist Jordan in reducing its debt burden and relieving the economy. Prime Minister Razzaz stated on April 9th that, according to the government’s most recent survey, 15.7 percent of people in Jordan live in poverty.

On Thursday, April 11th, the United States Treasury sanctioned a number of exchange dealers accused of funding Hezbollah, including Kassem Chams. The Chams Exchange operates under the license and supervision of Lebanon’s Central Bank.

As part of a US military assistance package agreed upon last year, the Lebanese Army announced on April 3rd that it had received six drones worth $11 million USD from the United States.

Continued fighting over Libya’s capital city delayed UN plans to hold a national conference on April 14th, meant to pave the way for long-awaited national elections. Fighting broke out on April 5th with a surprise offensive by forces loyal to Khalifa Haftar and the Libyan National Army (LNA), who aim to wrest control of Tripoli from the UN-recognized government. While the international community has urged Haftar and his forces to retreat, the head of Libya’s breakaway eastern parliament, to which Haftar professes loyalty, confirmed on April 13th that the LNA siege on Tripoli will not cease until militias and “terrorist groups” are expelled from the city. Forces aligned with the Tripoli-based government, including a loosely allied group of militias, have kept LNA forces at bay several miles outside the city center. The UN and Libya’s allies have urged Haftar to end the escalation as casualties rise. A UN report released on April 14th claimed over 120 dead, hundreds more wounded, and more than 13,000 civilians displaced by the violence so far. Separately, Doctors Without Borders issued a plea on April 11th on behalf of refugees trapped in Tripoli, caught between the fighting on the city’s outskirts and the Coast Guard forces, who prevent people displaced by the fighting from escaping to Europe. Despite increasing concern over the humanitarian fallout of the renewed hostilities in Tripoli, Italian Prime Minister Giuseppe Conte said April 13th that military intervention cannot be considered a solution to the present conflict, stressing the potential for increased migration to Europe. Meanwhile, Haftar visited Cairo on April 14th for a meeting with Egyptian President Abdel Fattah al-Sisi, whose support is critical to the LNA. A statement from al-Sisi’s administration following the meeting did not mention the offensive, but stated continuing support for “counter-terrorism efforts” in Libya.

Hundreds of Moroccan teachers staged a protest in front of the education ministry in Rabat on April 10th for the sixth consecutive week, demanding job security and full civil service benefits. The teachers are seeking to become employees of the education ministry in order to fully enjoy the benefits of the civil service, including better pensions and the right to work in multiple regions. Education Minister Said Amzazi threatened to fire the teachers if they do not return to the classrooms, saying the strike has affected seven percent of Morocco’s seven million students.

On Tuesday, April 9th, Benjamin Netanyahu was re-elected as Prime Minister of Israel, making this his fifth term in office. Netanyahu’s Likud party did not win the majority of seats, gaining 35  out of a total of 120. This win sets Netanyahu up to be Israel’s longest-serving Prime Minister, despite his pending criminal indictment due to allegations of corruption and fraud. His win also holds severe implications for the lives of Palestinians, as Netanyahu won re-election after a last-minute campaign promise to annex the illegal Jewish settlements in the West Bank if he were to win.

In Ramallah, the Palestinian Authority (PA) swore in a new government for the second time on April 14th after failing to recite part of the requisite oath during the initial ceremony on April 13th. The formation of a new government is meant to strengthen PA President Mahmoud Abbas and isolate Hamas, his political rivals and the ruling party in Gaza.

On April 11th, the state sponsored Qatar Airways responded sharply to April 10th comments by members of the US Senate Foreign Relations Committee and US Secretary of State Mike Pompeo. The Senate Foreign Relations Committee and Pompeo raised concerns over a proposed deal in which Qatar Airways would acquire a 49% stake in Air Italy. Members of the Senate believe the deal violates an aviation agreement signed between Qatar and the United States in January 2018, which restricted the services Qatar Airways can offer to and from the US market.

On April 12th, the Wall Street Journal reported that Saudi Arabia offered Libyan General Khalifa Haftar tens of millions of dollar to assist his bid to seize Tripoli. Haftar met with Saudi Crown Prince Muhammad bin Salman during his visit to the Kingdom on March 27th.

On April 13th, King Salman announced his support for the people of Sudan and the measures taken by the transitional military council in the aftermath of the ousting of President Bashir. The announcement included the provision of a humanitarian aid package.

New Zealand’s foreign minister confirmed Monday that a nurse has been held captive by ISIS in Syria for almost six years, information long kept secret for fear her life might be at risk. The status of nurse and midwife Louisa Akavi, now 62, is unknown. Her employer, the International Committee of the Red Cross (ICRC), says it has received recent eyewitness reports suggesting she might be alive. In a statement, the ICRC said that as recently as December, Akavi may have been seen by at least two people at a clinic in Sousa, one of the last Daesh outposts in Syria.

Meanwhile, rocket fire in Aleppo killed at least 11 people and wounded another 11 on April 14th, including civilians and members of Syria’s security services. SANA, Syria’s state news agency, said 20 rockets were fired by “terrorist groups” into the al-Jamaliyyah neighborhood of Aleppo.

Two weeks after Turkey’s March 31st local elections, official vote counts have not been finalized The mayorship of Istanbul, where the opposition Republican People’s Party (CHP) leads, remains contested by the ruling Justice and Development Party (AKP). On April 14th, the AKP Deputy Chairman stated that the AKP will submit an extraordinary appeal to the Supreme Electoral Council (YSK) requesting a renewal of Istanbul’s vote. President Erdoğan has claimed that election results were affected by “organized crime.”

State media reported on April 14th that Turkey holds 234 irregular migrants across the country, from Edirne province bordering Greece and Bulgaria to coastal provinces like Muğla and Aydın.

A British woman, who was arrested in Dubai in March 2019 over Facebook posts from 2016 insulting her husband’s ex-wife, has been released and returned to the United Kingdom. The case highlighted recent strictness in the enforcement of cybercrime laws as Emirati authorities have heightened scrutiny on popular social networking platforms such as Facebook, Twitter, WhatsApp, and the recently-banned Skype.

On April 9th, the Saudi-led coalition carried out airstrikes against two sites in Sanaa. No casualties were reported, but a residential building was struck. A Saudi spokesman said the strikes targeted Houthi drone-making facilities.

The exiled Yemeni President, Abdrabbuh Mansour Hadi, made a rare visit to speak to the divided Yemeni Parliament on April 13th in Aden, where the ousted Yemeni government operates. Hadi resides in Saudi Arabia, and his government enjoys the support of the Saudi-led coalition fighting against the Houthis in Yemen. Hadi’s visit came as Houthi forces, who occupy the capital of Sanaa, are working to organize elections to fill vacant parliament seats and enhance their claim to political primacy in the country. 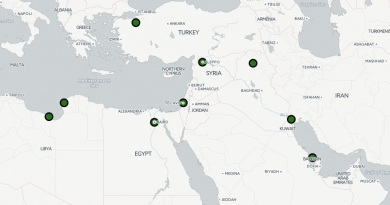