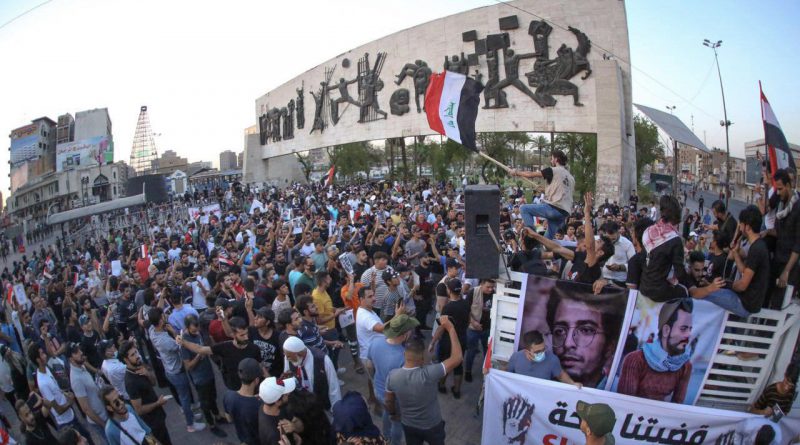 Analysis Feature Interviews
October 10, 2021October 12, 2021 Elections, Iraq
Ghazi Ghazi
Ghazi is a second year AM candidate at Harvard’s Center for Middle Eastern Studies. His research primarily focuses on politics, development, education, and social movements in the region, with a particular interest in Iraq and Lebanon.

In October 2019, protests against the government spread across major cities in Iraq, including the capital, Baghdad. Young Iraqi men and women were at the forefront of these protests, also known as the “Tishreen” movement. Thousands took the streets demanding an end to government corruption and more access to basic human rights such as clean water and education.

These protests continued for several months and led to the death of hundreds of protestors. Since then, a new government has been formed, but many grievances are still left unaddressed.  In October 2021, Iraq will hold its first parliamentary elections since the 2019 protests, nearly two years since the protests began.  Through all of this emerged an organization called “End Impunity in Iraq” (EIII), a grassroots movement by Iraqis that is working to shed light on human rights violations being committed in Iraq by different parties.

Editor-in-Chief Ghazi Ghazi was joined by one of the founding members of the organization, Sally Bachori, to learn more about EIII’s work and what this upcoming election means for Iraq.

Q. What led you to start this organization?

End Impunity in Iraq (EIII) is an independent non-profit international organization that is currently working on raising awareness of Iraqi human rights violations. The organization began as a digital grassroots movement to end impunity in Iraq through spreading awareness and carrying out initiatives by volunteer leaders domestically and internationally. Our team became aware of the significance of unifying Iraqi voices worldwide, especially after the anti-government 2019 protests, which revealed an emerging generation of young and promising Iraqis seeking justice and foundational changes away from the dire reality they have been experiencing for longer than eighteen years. On June 19th, 2021, EIII was officially registered as a non-profit organization in Pennsylvania, United States. This was followed by rallies that took place in over 20 cities worldwide on July 18th, 2021. The rallies gained broad support and proved to be a huge success in bringing the issue of impunity in Iraq to light. Today, EIII has captured international attention and reached multiple milestones to become widely regarded as one of the leading non-profit human rights organizations. In addition, EIII is the first of its kind and holds an important value for Iraq because it stands out from other initiatives in both its mission and objectives, acting as a unifying point of consensus for all Iraqis regardless of their religious, political, or ideological differences.

Q. What does your organization seek to accomplish?

End Impunity in Iraq (EIII) aims to put an end to the cycle of human rights violations against Iraqi citizens, which continues today with assassination incidents, mass murders, enforced disappearances, kidnappings, and death threats. Now more than ever, it is clear that the submission to influential political parties, sectarian factions, and dangerous armed militias has encouraged and strengthened impunity protections in Iraq. In EIII, we believe that justice and the rule of law are the pillars of peace, security, and stability. Therefore, our organization aims to end impunity in Iraq through the following steps: First, apply pressure to the Iraqi government to reform its judicial system and eliminate corruption practices. Second, urge and mobilize the international community to modify its approach and focus its course of action on supporting Iraq. Lastly, amplify national grassroots efforts carried out by Iraqi youth groups, human rights defenders, and civil society activists to enable their voices across international leadership and policy-makers worldwide.

Q. Has there been any response by the Iraqi government against your organization?

None. In fact, the Iraqi government has completely disregarded our actions and past statements we released to address concerns of holding lawbreakers and criminals accountable. It also does not seem to be willing to either change its course of action or even attempt to put an end to the cycle of crimes and corruption by any means. The only thing that the Iraqi government seems to be good at is putting the blame on “unknown” interfering powers and complain about how weak its structure is.

Q. With the upcoming elections, what do you think will change or stay the same?

Many around the world, including the United Nations and Western regimes, believe that elections in Iraq follow a “true” democratic process which is why they support the current political system and fail to acknowledge that the Iraqi regime does not allow for the emergence of voices outside the dominant and sectarian-ideological power. Eighteen years of failure and corruption brought four electoral rounds (2005, 2010, 2014, 2018) in which the will of the Iraqi people was confiscated in various ways that included fraud, political settlements, and legal jurisprudence. Yet, in 2021, Iraqis are somehow still expected to have faith in the election process and vote again on the so-called “rebuilding the state” project. Ironically, Iraqis are now frankly being told by the different political parties and their candidates that this is a failed and weak project, but it is at least better than nothing.

Furthermore, I think the Iraqi elections are no longer a matter of participation or boycott. All of the past and present Iraqi officials, without an exception, have contributed to the failure of the political, economic, and security management of the country, and in the absence of a real project to save Iraq’s future, the elections will not even be worth the value of what Iraqis call, “the elections’ purple ink.” Restoring people’s confidence and trust is a difficult responsibility that hardly anyone in the current political scene seems to be capable of. In the past held elections, participation rates were consistently low, and during the 2018 elections, participation rates hit their lowest at 20%. This low percentage sends a strong message to both the Iraqi government and the international community as a whole. If those promoting the election process were serious enough about supporting democracy, then they would have addressed the reasons behind voters’ reluctance and unwillingness to participate and focused not only on dismantling those reasons but also on providing realistic alternatives that potential voters can trust.

Q. What are, in your opinion, the most pressing issues for Iraq today?

Allow me to rephrase the question and ask, what is not considered a pressing issue for Iraq today? The list of pressing issues is long and, perhaps, neverending. But if we have to focus on a few, they will range from fiscal pressures, political rivalries, sectarian dominance to limited institutional capacity — all collectively presenting serious obstacles to necessary progressive reforms in Iraq. The only way to overcome these obstacles and achieve long-term stability is through strengthening the state and rule of law and eliminating external influences while putting an end to impunity and the continuous cycle of corruption.

Q. What changes are needed in Iraq’s political system?

Iraq’s post-2003 political system and administrations are often characterized by instability driven by multiple factors such as ethnic and sectarian conflicts, foreign political interventions, and security challenges created by terrorist groups, radical factions, armed militias, and the remnants of the Ba’athist regime. The current political system in Iraq is nearing its two-decade completion. Thus far, it has neither been serious with holding corrupt officials responsible for stealing and wasting billions of dollars from the federal budget, nor has it taken any tangible measures to achieve justice for the hundreds of thousands of lives lost. This system had many opportunities to reform from within and achieve true democracy but continues to fail the Iraqi people time and time again.

I believe that radical and foundational changes need to be made in order to achieve concrete changes within the current political landscape. All of these necessary changes can be boiled down to putting an end to impunity. If we are able to apply the rule of law above everyone while holding those responsible for crimes and corruption accountable, we can get closer to establishing a new chapter in which Iraqis can enjoy a politically independent state that is free from external influences militias’ threats, and radical-sectarian control.

Q. Do you think the 2019 October protests were a success?

Although some might argue that the protests did not yield the desired political changes that the protesters demanded, I believe that the 2019 uprising (Tishreen) surpassed the definition of a “protest.” The new generation of Iraqis protested peacefully and tried to impose reform options, irradicate radical dominance, eliminate sectarian control, and bring down a failed government. They wanted to contribute to the development of a new road map that combats unemployment, corruption, and religious interference. However, instead of having their demands met, they were faced with brutal repression and killing by those responsible for protecting constitutional freedoms and providing a safe environment in which the protesters could exercise their rights as free citizens.

It is very important to note that armed militias and influential political collations target key Iraqi figures who have the potential of rallying the masses to deter the formation of leadership within the Tishreen movement while spreading fear among the rest. Those same militias and political coalitions would neither attempt to change the system that elevated them to power nor even dare to push back against the pervasive Iranian and other external influences. Yet, the spirit of the Tishreen 2019 protests holds strong to this day. In fact, these young Iraqi revolutionaries turned the repression and threats they have and continue to face into a fuel resource to build a dignified homeland. The protests transpired into an ideology that focuses on amplifying free Iraqi voices, patriotic initiatives, and original sociopolitical thoughts. In my opinion, Tishreen today presents as an important lesson and a major stumbling block in the way of all those trying to plunder Iraq and restrict freedoms guaranteed by the constitution.

Q. What do you hope to see in the future of Iraq?

The future I hope to see in Iraq is one with a functional and transparent justice system and governmental institutions composed of competent and trustworthy officials who respect the law, human rights, and equal treatment of all Iraqi citizens. I hope to see a future in which the Iraqi people understand their constitutional rights and enjoy their freedoms away from the emotional propaganda that tries to plunge them into what I call “radical mindless puppets.” In order to achieve such a future, the ongoing corruption must be first dismantled in order to open up the space for innovation, collaboration, and better education. The results will not only yield a prosperous Iraq but also contribute to a wide global development, one in which the country is capable of playing a major role. Therefore, I call upon the international community to correct the course of its action by recognizing the seriousness of impunity and the absence of accountability in Iraq. Only then can the Iraqi people have the opportunity to contribute to the world’s peace through developing their democratic experience and consolidating the rights and freedoms guaranteed to them by the constitution in a safe and prosperous environment.

Sally Bachori is one of the founding members of End Impunity in Iraq (EIII). You can follow their work on Twitter @EndImpunityIraq. 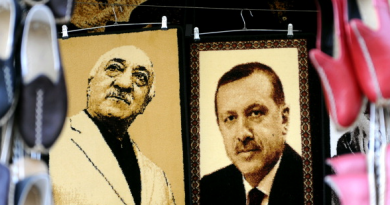 November 15, 2016 Comments Off on From ‘parallel state’ to ‘terrorist organization’: Dissecting Erdoğan’s labeling of Gülen 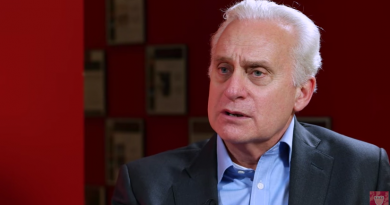 Examining Turkey as a Model for Democracy with Ambassador Francis Riccardione

January 29, 2016 Comments Off on Examining Turkey as a Model for Democracy with Ambassador Francis Riccardione